What Is Vulkan Run Time Libraries and Do You Really Need It?

by seatontic
in Technology, Gaming
0

Let’s have a look at what exactly Vulkan Run Time Libraries is and whether or not it’s a smart idea to remove it from your computer. As they claim, this programme was placed on their computers without their consent. As a result, people are split on whether or not this application is spyware of some form that might cause computer difficulties. As a result, we’ll explain What is Vulkan Run time Libraries, if it’s a malicious programme, and whether you should be concerned if it’s on your machine.

Vulkan Runtime Libraries are those graphics drivers that are automatically installed when we update our computer’s graphics drivers. It is a Khronos Group 3D graphics and computation API that is part of the Vulkan framework.

This application is loaded on the PC automatically whenever the graphics or video drivers are updated. It is now installed by display card makers such as NVIDIA, Intel, and AMD, which are present on our PCs.

If you’re wondering what the Vulkan Runtime Libraries (VulkanRT) are for and how they may help you with your computer, keep in mind that they work to reduce performance overhead and provide users direct control over the GPU.

It also aids in minimising CPU utilisation on computers during high-performance-inducing jobs so that the performance cores do not overheat, causing the computer to shut down. Some of you may believe that it is a pointless application and that you should delete it from your computer, but you should not do so because we have previously highlighted its value.

Because this package is now bundled with the Nvidia drivers, you might not notice how or where it was installed. VulkanRT is required for graphically intensive games and other applications that use graphics cards, such as video editing.

More specifically, it is referred to as a 3D Graphics API, whereas Vulkan is a graphics standard that is akin to OpenGL or DirectX. Vulkan Run Time Libraries is installed on our PC for gaming, and its main function is to improve 3D performance.

Where Can I Find the VulkanRT Program on My Computer?

Method 2. Look for the following application inside the Settings App:

On a Windows 10 PC, you may also check the installation by heading to the Settings programme (Windows + x). To begin, go to Settings > Apps and Features > 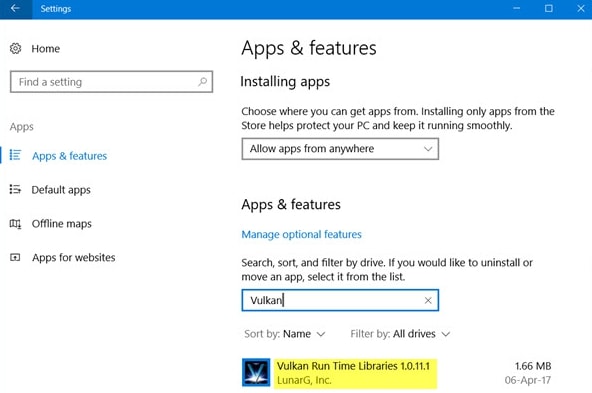 Should You Remove Vulkan Run Time Libraries from Your System?

The short response is a resounding NO!

Many of you may now be wondering what will happen if you uninstall it. Keep in mind that the uninstallation of this application from your PC will go unnoticed because it is not a core file required for Windows to function. However, keep in mind that when playing games, you may notice the removal of Vulkan Run time Libraries, which is required for 3D performance.

For example, several games, such as Dota 2, Talos Principle, Star Citizen, CryEngine, and Unity, as well as Steam titles, require Vulkan Run Time Libraries, so if you’re playing one of these games, it’s not a good idea to remove it.

How do I reinstall the Vulkan Runtime Libraries after they’ve been uninstalled?

If you wish to reinstall it, you must first reinstall your graphics drivers, which will then reinstall the Vulkan Runtime Libraries on your machine.

Finally, we hope you have learned everything there is to know about this app, which is the main objective of this essay.

Also, we want to emphasise that this programme is not malware and that keeping it on your computer is completely safe. Because you can’t download Vulkan Runtime Libraries individually once it’s been removed, you should be aware that some of your computer’s games may not operate as well as they did previously. Apart from that, if you have any more questions or concerns concerning the Vulkan Runtime Libraries, please do not hesitate to leave a remark in the box below.