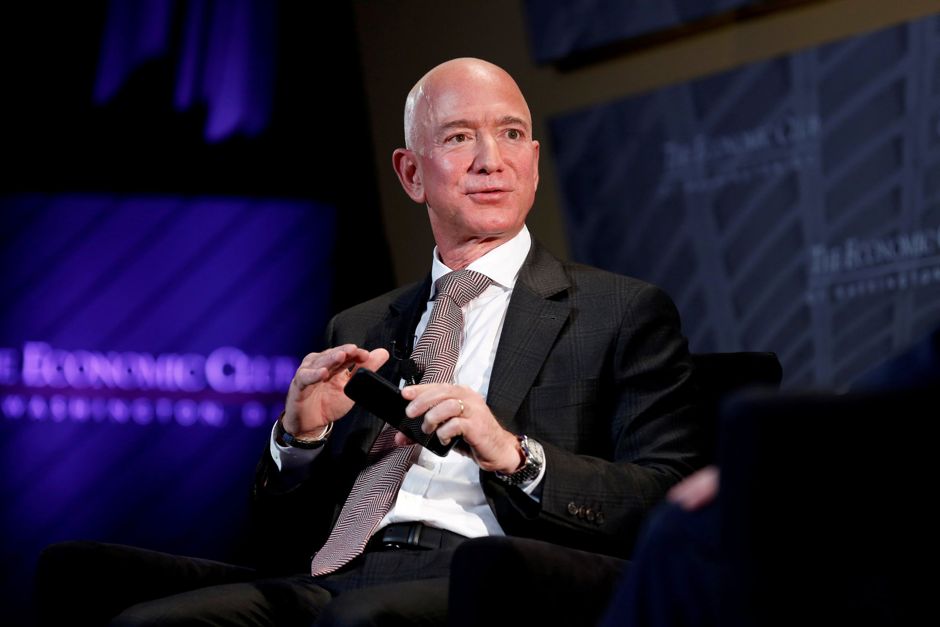 Jeff Bezos: Who Is He?

The founder and CEO of Amazon, the largest online retailer in the world, is Jeff Bezos, also known as Jeffrey Preston Bezos.

Bezos has amassed a significant fortune due to his successful business endeavors, making him the “richest individual in modern history,” according to the Forbes wealth index.

After Elon Musk and Bernard Arnault & Family comes Jeff Bezos (the founder of Amazon.com).  Third in the list of Real-Time Billionaires List.

Before becoming a software mogul, the 57-year-old lacked the Midas touch.

Like many millennials today, Bezos worked numerous jobs for most of his 20s.

He committed to the idea of one day running his own business at an early age, according to a 1999 Wired article on the entrepreneur.

When he joined Bankers Trust as a product manager, he made a career transition and entered the banking industry.

He then began working for D. E. Shaw & Co., a newly founded hedge fund that prioritized mathematical modelling, in 1990. His tenure there lasted until 1994.

The Journey of AMAZON

When Amazon was founded on July 5, 1994, as a website that only sold books, Jeff Bezos had a vision for the business. He foresaw the company’s rapid growth and supremacy in e-commerce.

His goal to turn Amazon into “an everything store” was constant.

Being a pioneer, it eventually took control of the cloud computing market and significantly influenced the Internet’s physical infrastructure.

To purchase books as eBooks, Amazon also provides the Amazon Kindle, and by 2010, more people bought e-books from Amazon than actual books.

Then from 2011-2015, Amazon started offering streaming services like Amazon Music and Amazon Video.

By 2015, its market capitalization surpassed that of Walmart.

After Amazon achieved significant progress in selling CDs and DVDs in 1997, Bezos wanted to explore different ways to grow his online business.

He sent 1,000 randomly chosen clients emails, asking them what they would want to see Amazon sell in addition to what they already do.

Bezos said in an interview at the Economic Club of Washington in 2018.

He said that the responses were very lengthy, but they were searching for how they answered the question at that time.

Amazon can sell anything this way, Jeff thought to himself at that point.

After that, they started selling electronics and toys and many other toys over time.

“ THE NO.1 THING THAT HAS MADE US SUCCESSFUL BY FAR IS OBSESSIVE COMPULSIVE FOCUS ON THE CUSTOMER”

Jeff Bezos’ net worth is approximately $166.4 billion, according to Forbes.

With its headquarters in Kent, Washington, Blue Origin, LLC is a privately owned American aerospace manufacturer and provider of suborbital spaceflight services.

The organization is run by CEO Bob Smith and was founded in 2000 by Jeff Bezos.

The founder and executive chairman of Amazon seeks to use reusable launch vehicles to lower costs and increase the dependability of space travel.

Blue Origin is taking a step-by-step method to transition from suborbital to orbital flight, building on each stage of development as it goes.

The company’s name alludes to Earth, the blue planet, as its starting point.

Then the calculations are:-

You divide that again to get the number of days and arrive at $205 million daily.

His daily salary increases in line with the growth of his net worth.

Now, if you are wondering how much money Jeff Bezos make a second?

According to a Business Insider story from October 2021, Jeff Bezos makes over $2,537 every second in total income.

In only one second, that is more than half of what the typical full-time worker in the USA makes in a month.

Because of his unwavering commitment and diligence, Jeff Bezos has reached his current position.

At the George W. Bush Presidential Centre’s Forum on Leadership in 2018, the billionaire noted that one of the advice he most frequently delivers to his younger workers and his four children is to find your passion in life.

Bezos defines true success as figuring out a method to turn a hobby or interest into a vocation. He also thinks that everybody has a passion.

Chris Blair, a freelance writer. He is loving every bit of it. Her niches are marketing, lifestyle, wellness, travel and entertainment. Apart from writing, Chris loves to travel, binge-watch, research conspiracy theories, Instagram and overthink. 7 Best Things Lawyer Snote, Get Me Seen.