CompatTelRunner.exe is the most talked-about extension among Windows users all around the world right now. Because many Windows customers have reported seeing an unusual extension called Compattelrunner.exe running in their task management, this is the case. Furthermore, it’s worth noting that this extension consumes even more disc space and CPU than Google Chrome, which is notorious for consuming the most CPU and memory. Now, we should clarify that this is not a virus or Trojan, as many Windows users mistakenly assume. Rather, it is a Windows extension that Microsoft has included with the operating system.

What is CompatTelRunner.exe and what does it do?

CompatTelRunner.exe is a Windows extension that was first released by Microsoft in Windows. This plugin assists customers in upgrading to the most recent version of Windows as well as Service Pack Upgrades. It also checks for compatibility issues in Windows and, if any are found, prepares a report and sends it to Microsoft.

Many Windows users who choose privacy over the latest capabilities have deactivated the CompatTelRunner.exe extension, according to reports. We should warn you, however, that deactivating this extension is not as simple as disabling other extensions. This is because Microsoft has packaged this extension with TrustedInstaller’s signature. As a result, even if you are an administrator, you will receive an Access Denied error message if you attempt to edit this extension.

The simplest approach to stop compattelrunner.exe from consuming too much disc space is to remove it from the Task Scheduler. Because of this –

You will no longer have a high disc utilisation problem on your Windows PC once you disable the Microsoft Compatibility Appraiser or Compattelrunner.exe software. This is, however, a temporary solution that may or may not work for you. As a result, we’ve included a solution below that allows you to delete it instead of deactivating it. If the aforementioned method fails to work, you can try the one listed below.

This is the second, and arguably the best, way to fix the compattelrunner.exe excessive disc use issue on your computer. This solution requires us to completely remove the CompatTelRunner.exe programme from our computers.

However, as we previously said, this extension was included by Microsoft itself. Because TrustedInstaller owns the extension, you won’t be able to uninstall it directly. As a result, you must first transfer ownership to the administrator of the PC. As the most critical component of this procedure, make sure you’re logged in as an Administrator. Proceed with the approach once you’ve double-checked that.

This has to be altered since we wish to remove the application from our PC, which is now only possible with TrustedInstaller. As a result, the ownership of CompatTelRunner will now be transferred from TrustedInstaller to Administrator. 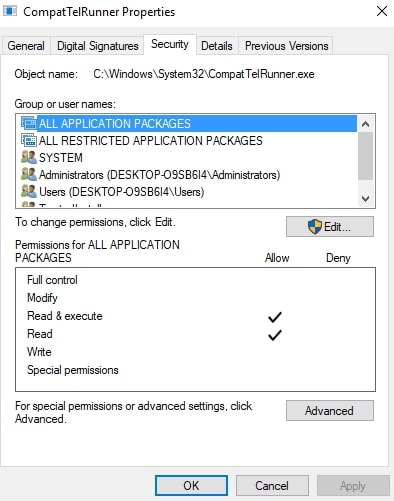 We’ve now entirely transferred control of CompatTelRunner from TrustedInstaller to Administrator. As a result, just remove the compattelrunner.exe application from the System32 folder by right-clicking on it. Despite the fact that this is the best-known-to-work approach accessible to us, reports indicate that it does not work for certain people. As a result, the last alternative is to completely delete the KB2952664 update, which is the core cause of the CompatTelRunner application’s installation on our PCs. However, this is only a temporary solution because Windows will automatically install this update again.

If nothing else seems to be working for you and you just want to remove the KB2952664 update, you may do so by following the steps outlined below. Furthermore, it’s worth noting that this is a compatibility update for Windows 7. Microsoft published this to ensure that your Windows 7 PC is running the most recent version.

Surprisingly, if you get an error, you can be confident that everything is properly removed. When you run the above command in Command Prompt, you should obtain an error message that says “cannot locate HotFix,” indicating that it was successfully removed.

It’s also conceivable that you’re not running the Windows 7 KB2952664 update yet still have the compattelrunner.exe excessive disc utilisation problem. As a result, you can also remove the Windows 7 updates KB2977759 and KB2976978, which have been reported to cause this problem. To remove these versions, just change your version number in the Command Prompt with the above-mentioned KB2952664.

As previously stated in this post, Compattelrunner.exe is not a Trojan or a Malware. However, it is well known that this extension can consume up to 70% of disc and CPU resources, which is a serious worry. There is also a privacy concern, as the extension logs whether or not there is a problem on Windows. Thus, if you have an issue with compattelrunner.exe consuming a lot of disc space or prefer privacy, you may safely delete/uninstall/disable this extension using the techniques listed above.

What Is Vulkan Run Time Libraries and Do You Really Need It?

Alternatives to GarageBand On Windows 10

Alternatives to GarageBand On Windows 10